Join my newsletter list to be the first to hear our latest news! Learn More
You are here: Home / Office Humor / Top 10 Things Found in a Copier
0shares

The white dried out corpse of a lizard next to the fuser. Nothing more than a shell of its former self, it must have crawled in next to the fuser for a warm place to sleep that eternal sleep.

Unfired cartridge. I’m sure somewhere, at some point, someone has used a copier for target practice. Nobody was shooting at this copier though. It was an operating copier on a military base where ammunition was stored nearby. Good thing it didn’t get in the fuser, this copier might have shot back!

Pretzels. The call was for jamming in the document feeder. Didn’t they read the manual? Everyone knows you lay pretzels on the glass to make a copy!

Colony of ants. Not sure if the ants were confused, desperate, or just evolving to the next level. There were literally hundreds of them crawling around inside. Maybe the engineer saw the Flintstones and thought ants would be faster than a bird.

A lit flashlight inside the copier. According to the tech, he was in a hurry and didn’t notice he left it there. The room had one of those motion detecting light switches that turned off the lights after he left. As someone headed in to make copies they saw this strange glow coming from the copier. It’s not very often someone catches a copier in the act of talking to the mothership.

Mice. So many mice. Evidence of their presence can be found but it’s rare to actually see one. Except the time the little fella got caught in the drive gears. Or in the fuser, or on the power supply, Or when…. you get the idea.

Snakes. Maybe they are after all the mice that seem to turn up in copiers. Copiers are warm inside with many places to hide.

Lots of rice in the paper drawers. Works for phones, why not paper? This wouldn’t have been too bad except pieces were being pulled in the paper path which scuffed the drum and fuser roller.

Raw sewage from a leaky pipe above the copier. It was in a basement hallway with utility pipes running above the copier. The copier was beyond repair but nonetheless an assessment was made for the insurance claim. Didn’t even need to open the lid. It was an open and shut case, so to speak.

A Ream of paper still in the wrapper. Also, winner of the “not my job” at the Office.

If you enjoyed that list, there’s plenty more office humor in my book The Copier Jam!

Previous Post: « Gift Guide for the Tech in Your Life
Next Post: Top 10 Places a Copier is Found » 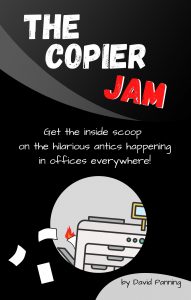 The Printer Jam is a participant in the Amazon Services LLC Associates Program, an affiliate advertising program designed to provide a means for sites to earn advertising fees by advertising and linking to amazon.com.


0shares
We use cookies to ensure that we give you the best experience on our website. If you continue to use this site we will assume that you are happy with it.OkRead more